Baby, it’s cold outside! Princess Beatrice and her young family wrap up for a waltz around Hyde Park’s Winter Wonderland

By Mark Hookham for the Sunday Mail

Princess Beatrice and her young family were spotted enjoying all the fun of the fair yesterday during a visit to Winter Wonderland in Hyde Park.

Also with the couple was Edoardo’s son, from a previous relationship, five-year-old Christopher Woolf, known as Wolfie.

After browsing the Christmas market and playing fairground games, the family stopped at a German sausage stall in London’s Bavarian Village Park.

Sitting on outdoor benches, they feasted on large hot dogs and hot drinks.

Dressed in a winter coat with a fur-lined hood paired with a teal scarf and black beanie, Beatrice was barely noticed by the other families.

Edoardo, 38 – known as Edo – also kept a low profile in a green flat cap and red and white casual trainers.

“They didn’t want us to make a big deal out of it. They were really normal and nice, ”said a viewer yesterday.

“They stopped at a raffle booth and a booth where you toss rings on a hoop and seemed to enjoy traditional fairground games.

“They didn’t go on any of the scary rides. It looked like they were enjoying a very low-key day at the park and getting in the party mood.

The two-hour visit was a rare public appearance for the couple since Sienna’s birth on September 18 at Chelsea and Westminster Hospital. 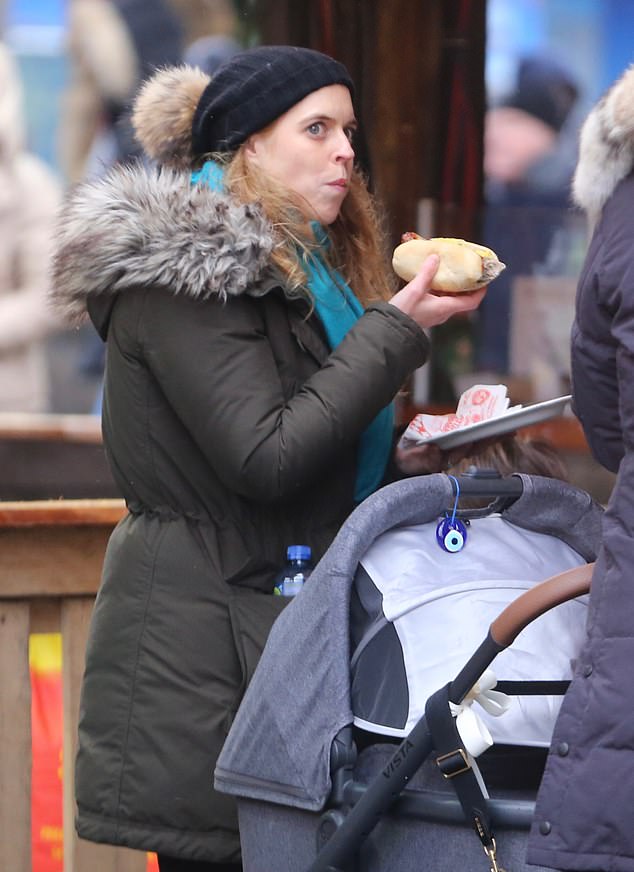 After browsing the Christmas market and playing fairground games, the family stopped at a German sausage stall in London’s Bavarian Village Park.

During the trip, Edo posted a photo on Instagram showing him with Wolfie, whose mother is American architect and designer Dara Huang, at the Acropolis.