During a grim press conference, Frank Young’s family shared both their sadness and their appreciation for everyone who helped find the five-year-old boy.

Young was found dead in the Carrot River on Saturday, more than two and a half months into his hunt.

“All of us are very hurt, heartbroken, please know that we will not see Frank again,” said his grandmother, Teresa Whitecap.

Young was reported missing around noon on April 19. He was last seen in the yard of his Red Earth Cree Nation home, although police say he may have been spotted at a local playground around 2:30 p.m.

Whitecap and other family members at the Prince Albert press conference wore orange shirts with a picture of Frank smiling, surrounded by characters from the children’s show Paw Patrol.

“Frank always looked forward to school and (at home) his favorite was Paw Patrol,” Whitecap said.

“So he had toys with Paw Patrol. He loved playing with his siblings who stayed with him.”

An intensive search began immediately after his disappearance. As the days stretched into weeks, the effort saw hundreds of volunteers take part, helping police and other agencies.

“We thank you so much for everything you have done for us over the past 81 days,” said Whitecap.

While extensive ground and aerial searches were conducted, in the weeks following her disappearance, search efforts focused on a river that runs through the community.

The scope of the search had narrowed by the end of June, with local firefighters from Red Earth and neighboring Shoal Lake Cree Nation continuing their efforts.

They discovered the boy in the river on Saturday.

“We would like to express our gratitude, especially to the fire suppression crews from both communities, who stayed until the end,” Shoal Lake Chief Marcel Head said at the press conference.

Head said advice from elders familiar with the river helped find the boy.

“Exactly, you know where we got instructions and a description of where he might be,” Head said.

While Young lived with his aunt and uncle on Red Earth, his parents are from Shoal Lake.

“Words cannot express the deep sadness we have in both communities and I know we expected Frank to return home safely,” Head said. 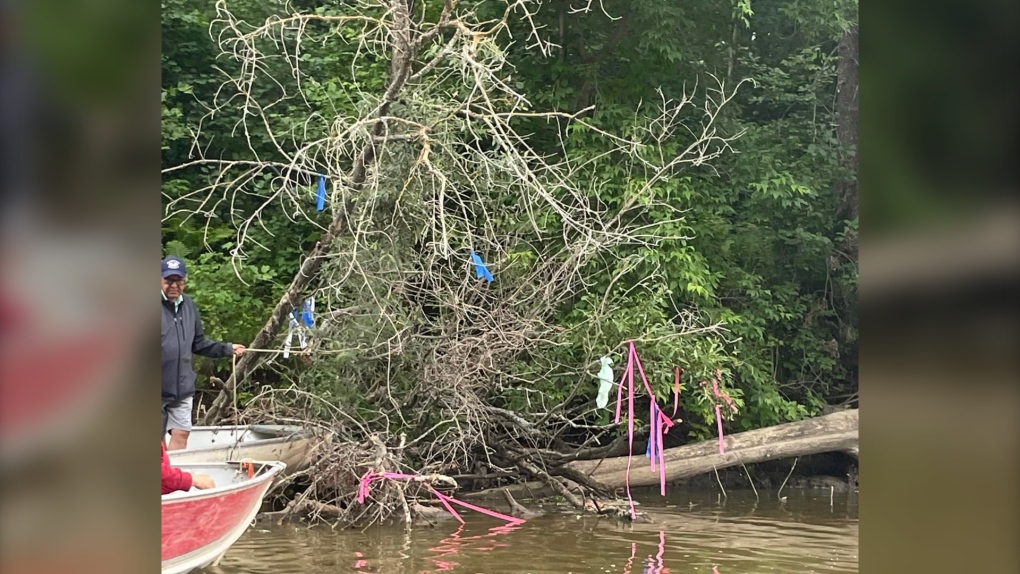 Ribbons were tied to a fallen tree where Frank Young was found. (Facebook/Barb McKay)

Young’s disappearance was never considered a kidnapping, and Tonge said that now that he had been found there was nothing to suggest otherwise.

“We have uncovered no suspicious evidence regarding Frank’s death,” Tonge said.

“There was no obvious trauma, Frank’s clothing was intact and everything we saw was consistent with Frank being in the river for a considerable period of time,” Tongue said.

He said the inquest will continue in conjunction with the Saskatchewan Coroners Service. An autopsy was scheduled for Tuesday

Young’s grandmother said the boy is due to start kindergarten this fall.

She described how on Sunday she and other elders traveled by boat to the site where he was found.

“Prayers were said at the site, we were given ribbons,” Whitecap said.

The blue and white ribbons were tied to a fallen tree that leans into the river at the site.

“The blue ribbon represented the color of Paw Patrol and the white would have represented Frank’s life, pure white — Frank lives a sinless life,” she said.

In the months since Young’s disappearance, donations poured into the community to help support the search.

Head said that after the boy’s funeral, the money could be used to erect a monument in the boy’s honor.

“Kind of a memorial for little Frank,” Head said.

“Just to remember the little boy.”